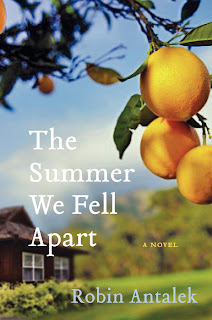 Robin Antalek is the author of The Summer We Fell Apart (HarperCollins 2010), chosen as a Target Breakout Book.  Visit her website at www.robinantalek.com.
She also blogs at www.robinantalek.blogspot.com and thenervousbreakdown.com. You can find her on Facebook, too.

I thought it would be easy.  Well, perhaps easy is the wrong choice of words.  Maybe a different kind of easy. After all I managed to get a book published.  Pretty awesome reviews.  Target Breakout Book.  Book Clubs can’t get enough.  Close to eight months after publication I’m still getting interview requests and book club visit requests and showing up at bookstores for signings.

Still. There is that nagging voice of self-doubt.

Will I be able to do it again?

It wasn’t like The Summer We Fell Apart was the first novel I had ever written.  I got my wonderful agent Julie with a book that we both really loved – but didn’t end up selling.  Before Julie, I had written three other novels and a short story collection.  The stories had won a prize and publication by a regional publisher.  I had written PR and grants and radio scripts – anything to keep me in printer ink.  So writing really wasn’t the problem.

When I was nine, my parents’ gave up our very traditional life in Manhattan to move to a slip of a town on the west coast of Florida near the Everglades. This was 1970 and the landscape was akin to the Wild West.  My dad, an engineer, who had a hand in designing the mini cars that would become Matchbox, decided to give it all up to run a pool company.  Yes, I am very familiar with the smell of chlorine and what it takes to get garden snakes and the occasional rattler out of a pool filter.

Ten years later I left the Everglades to go north to school and really never looked back.  Twenty years after I did my parents eventually migrated back to a bedroom community within a train ride distance to Manhattan.

But those ten years stayed with me.  The stories and the people and atmosphere of old Florida is in my blood.  I have attempted two novels since The Summer We Fell Apart.  Both about this Florida – my Florida.  Both were disastrous.  I knew something was wrong with each of these books – but I couldn’t see it.  This is a world I know so well – maybe too well and that was part of my problem.

I took the best parts of the first manuscript and wrote the second.  Still, something wasn’t right.  I didn’t have that magical voice that grabbed me, compelled me to tell a story.  I had half a voice.  It was a whisper.  But it was something.

So I had a conversation with my agent.  A long, wonderful, winding conversation between friends.  Wonderful Julie listened while I rambled and all of a sudden IT was there.  The story I wanted to tell.  The whisper grew louder and louder until I could no longer ignore it.  It’s a beginning.  The bare bones of a beginning.  Day by day, hour by hour, the story is taking shape, the voice I was straining to hear is practically screaming.  It’s time to get back to work.  And it feels so good.

Posted by Rebecca Rasmussen at 9:04 AM

Oh this is so, so wonderful you don't even know. Sometimes I think I hold myself hostage with the wanting to do it all right the first time my fingers go paralyzed. Thanks, Robin for sharing your story. And of course, to amazing Rebecca.

I am like that, too, V. I love this blog because Robin says what a lot of us have been thinking :)

Robin, you sum it all up so perfectly-- how part of you knows when the story isn't right, and it is so scary. But when it is right, finally, it is magic.

Yes - it's the whisper - and you were attentive and heard it. Hurray! An excellent post.

I love that moment where everything starts to sing. Thank you Robin!

Oh ladies you are ALL so wonderful! Starting again can be so daunting -- even after -- or maybe because of -- that first blush of success. But when its working again -- oh -- it is magic! Thanks for having me lovely Rebecca!