Why I Write: The Battle of Right Hand, Left Hand By Alan Heathcock 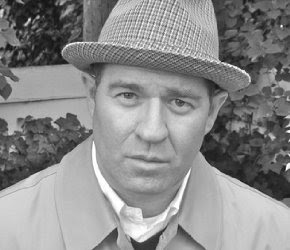 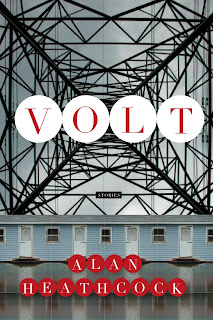 Alan Heathcock's stories have been published in many of the country's best journals, magazines, and anthologies, including Zoetrope: All-Story, VQR, Kenyon Review, Harvard Review, Five-Chapters, Best American Mystery Stories, and others. He's the winner of the National Magazine Award in fiction. A native of Chicago, Illinois, he lives in Boise, Idaho, where he teaches fiction writing at Boise State University, and is a Fiction Fellow for the state of Idaho. His story collection, VOLT, will be published by Graywolf Press, March 1, 2011. You can find him at http://alanheathcock.com
Why I Write:                         The Battle of Right Hand, Left Hand
My writing studio is a 1967 Roadrunner travel trailer, packed with books, trophies, and random oddities.  My favorite piece is a vintage movie poster from the 1955 Charles Laughton classic, The Night of the Hunter.  The picture is of Robert Mitchum, who plays Harry Powell (a.k.a. The Preacher).  In the poster, the preacher is leaned forward, his eyes locked on the viewer.  His right hand rests atop a porch post, and across his knuckles are the tattooed letters: L-O-V-E.  His left hand is down the railing, held close to his heart—those knuckles read       H-A-T-E. 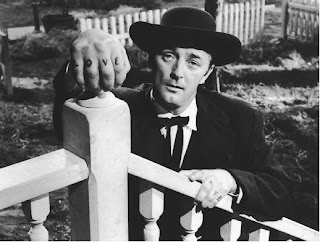 In a famous scene from the film, the preacher holds court in a little country diner, telling the patrons the “story of life”, the eternal battle between the left hand and the right hand.
“H-A-T-E,” the preacher bellows, holding forth the spread fingers of his left hand.  “It was with this left hand that old brother Cain struck the blow that laid his brother low.”
He lifts the right hand.  “L-O-V-E.  You see these fingers dear-hearts?  These fingers have veins that run straight to the soul of man.  The right hand.  The hand of love.”
The preacher then interlocks the fingers of his two hands, twisting them, wrenching them back and forth.  Which hand will claim victory?  At first, it looks like the left hand, but then, “HOT DOG, loves a-winnin’!”  The right hand puts ol’ brother left-hand down for the count.
It’s a strange and brilliant scene, and one that on its own merit tells the story all of us hope is true: love wins out over hate.
I believe in the right hand.  I live my life, raise my kids, travel about with my wife through the world at large, all with a fervent, evangelical, belief in the enduring might of love.  My greatest hope is that the preacher’s tale is true.
Yet the movie, like life (my life, at least), is more complex than the parable would have us believe.  The truth of the movie is that the preacher is not a preacher at all.  He’s an ex-con, a thief and murderer masquerading as a preacher to win favor with a widower and her two children, in the hopes of stealing a large sum of money he knows they have hidden somewhere on their property.  So where does that leave us?  Can we believe the preacher’s pitch, knowing the man is not, in fact, “good”?  Can a message of love be delivered via the left hand?
When I was young, maybe seven or eight, my Grandpa Heathcock sat me up on his lap and told me a story about a time he was working as a foreman for Sinclair Oil.  He said he was driving a one-lane road through the oil fields when his truck came nose to nose with another truck.  The road was too narrow, the ditches too steep, for either truck to turn around.  One of them would have to back up the way they came.  My grandpa said he got out of his truck and told the other driver he was trespassing on company land and had to put his truck in reverse.  The man refused.  I remember clearly that my grandpa balled a fist, and told me, “So I went and got me a tire iron and I hit that man.  Then that man backed up his truck.”
Likewise, while growing up in the Southland area of south Chicago, I was confronted on almost a daily basis with situations that confounded my sense of moral truth.  I knew good people, people from church, who spoke of hate--racism, sexism, religious intolerance, homophobia.  I knew people who did bad things, terrible things, who were also generous and loyal, who did tremendous good for the community.  I’ve seen people beaten, stabbed.  I’ve seen gun play.  I’ve seen people robbed, been robbed myself.  I’ve seen everything you think would reside neatly in the right or left palm, and yet judgment has often been unclear to me, like looking in my grandpa’s eyes and not knowing what to feel, like looking at the palm of a thumbless hand, a hand with four fingers all of equal lengths.
Once, a group of friends asked me to escort a guy out to an old rec. center at the end of a dark road, making him believe we were going to a party, but knowing I was leading him into a terrible beating.  The guy had done awful things, things I won’t describe here other than to say I thought he might deserve his fate.  Yet what I did still troubles me, one hand brutally wrenching back the wrist of the other.  But which hand did the wrenching, and which did the hurting?  Was I an instrument of justice?  Of right?  And what if I didn’t lead that guy out to the rec. center?  What if he went unpunished?  Doesn’t the right hand, sometimes, have to subdue the left?  Isn’t that the very definition of war?  But also, in that sheer ferocity with which the right attacks the left, do they not become the same?  In the moment I decided to take on the task, already knowing its end, did I not take on the role of Cain?
I long wondered why my grandfather told me the story of the oil field and the tire-iron.  For a long time, I thought he was somehow giving me instruction on the true nature of man.  But now that I’m older, I don’t think he was giving instruction at all.  Instead, I believe he was asking a question he couldn’t answer, one he hoped some day I might understand.
Every story I’ve ever written ponders such questions, trying to make sense of the world described to me by my grandfather, the world I’ve seen with my own eyes, and changed with my actions, struggling to parse out the left hand from the right.  People write for many different reasons.  I write to investigate, to seek out answers, to calm the hurt, to stroke the troubled mind.  Sometimes I’ve found clarity.  Many times I’ve discovered the questions to be unanswerable.  Either way, each morning I take sanctuary in my trailer and scrawl out new words, words I hope take me deeper into the murky lake of truth, the preacher glowering down from the wall, challenging me, daring me, to reveal what’s right and righteous.
Posted by Rebecca Rasmussen at 8:46 AM

Wow, Alan, if your blog can contain this sort of incredible electricity, I can't imagine how powerful VOLT must be.

You've given us a lot to think about. Can't wait to read more.

Thank you Alan and Rebecca!

Thank you, Rebecca, for hosting this and so many other amazing writers. I'm enjoying the browse around.

Thank you Alan and popsicledeath!

Thank you Alan and popsicledeath!

Saw that movie and remember it ...so well described in this post.Well done! Also, this author probes the questions of why there is this juxtaposition...in a captivating style. Great read!!

What a beautiful, thoughtful piece. Thank you, Alan Heathcock, and thank you, Rebecca, for your terrific blog!

I was just saying how writing is like praying for me. The two have co-mingled....which I find very similar to trying to make sense of the world.
Lovely Piece Alan! Blessings,

Zounds! This is so smart, thought-provoking and well written. Thank you, Alan. And this movie really gripped me too..it is beyond creepy and somehow says it all. I used a line from it in an epigraph to my Mermaids novel: "Salvation is a last minute business."

Thanks to all. It's alway a little scary to put yourself "out there" on the long limb that is the truth, and it's humbling to have so many folks drop kind words to this post. Best to all of you. Keep fighting the good fight.